Join my newsletter list to be the first to hear our latest news! Learn More

The fourth of July, a day we celebrate as essentially “the birth” of the United States of America; the day the Continental Congress formerly adopted “The Declaration of Independence,” I wanted to share a poem I wrote about the most important freedom there is. To truly be “set free” is not an earthly, physical matter (i.e. 13 colonies claiming their independence from England, or a person being released from prison, or a slave gaining emancipation from a “master”).

Nor is truly being “set free” an intellectual matter. The Lord’s words (discussed in the next paragraph), “The truth shall set you free,” are commonly used in academic circles to promote the power of learning, but the freedom of which He spoke was not centered on either physical or intellectual freedoms. There is a far higher form of freedom, and it concerns our inner being, our eternal soul. The only freedom that is eternally significant is a person’s spiritual freedom from the chains of sin and its horrible “wages,” which is separation from God forever. True Freedom is Free.

What makes you a slave?

In John chapter 8, the One Who is Truth Personified explained that those who commit sin are the servants (slaves) of sin. This includes everyone, “For all have sinned, and come short of the glory of God” (Romans 3:23). He said the servant is not permitted to abide in the House of God (sin cannot abide in His Holy Presence). Only the Son, Who is perfectly sinless like the Father, abides in the Father’s House forever. But there is hope for every sinner-servant! Jesus (the Son of God) went on to say, If the Son shall make you free, ye shall be free indeed (John 8:34-36).

The Father’s Eternal Son, Who willingly became the God/Man so He could qualify as mankind’s sin-substitutionary Sacrifice, has made it possible for whosoever believes on Him to be set free from the bonds of their servanthood to sin and death! On the cross of Calvary, Jesus paid the wages of sin in full, so we can be free from God’s righteous condemnation and free from the guilt of sin and free from the bondage of sin and free from death (Romans 6:22; 8:1-2) and, instead, be brought into the family of God, where we will one day dwell with “our Father” forever! The Lord Jesus came to give a declaration much greater than America’s “Declaration of Independence”! He came to proclaim liberty to the captives of all nations, all people groups, all generations, and every individual. He is the Truth that makes a person free. He is “the Way, the Truth, and the Life” into the Father’s House forever (John 14:6). I’m so glad to be part of the family of God, aren’t you?

Don’t forget to check out our Caldwell Chronicles Podcast, we have the ENTIRE book of Revelation studies available on PodBean, plus all of our messages on the Explosive Early Church from the Book of Acts.

Katherine is an amazing and prolific author, writer, and teacher of "The Caldwell Commentary" series (now at 24 books) and founder of The Living Word Ministries (1987). She was raised on the northshore of Chicago, graduated from prestigious New Trier High School, earned her Bachelors' (and part of her Master's) degree in Teaching from the University of Illinois in Dekalb, and has lived in Pinehurst, NC since her marriage in 1975. Her ancestry stems from Corinth, Greece (attended Greek School in her childhood). Katherine came to Christ through the witness of a Messianic Jew, which is why her "life verse" is Romans 1:16 - not only is she unashamed of the Gospel, but it was literally "to the Jew first, and also to the Greek" in her life!

The Lord has blessed so many women, including myself through, Katherine’s teachings. I have been to other ladies Bible studies but none that compare to Katherine’s.

I’ve been needing this since we quit the night time study. Thank you all for all your hard work. May the Gospel go forth, it’s all about Jesus!

I’m dining on the finest heavenly meals as I gorge myself on your commentaries.  How much we need to be reminded of what God says about present world conditions.  Keep it up! If your busy world ever allows it, I’d enjoy hearing from you, too. The older I get the more I marvel at His infinite, unchanging love for me — such an ordinary, every-day person, who needs His forgiveness over and over again.  The desire to please Him gets stronger and stronger the closer I get to the end of  this earthly life, and it’s a blessed life leaning heavily on him. So thankful for you and your ministry!

Not only are Katherine’s lessons inspirational, but she generally accompanies them with a little humor, such as her very descriptive illustration of Luke 8:27’s demoniac as “the crude, rude dude in the nude”!​

I have been so spoiled these past six years, that I have been able to learn from Katherine in person. She is a devoted student to the Word. She is an excellent communicator, who carefully teaches the details of Biblical text, to which there is no end. She loves the Lord and her passion for learning is beyond contagious. I am so grateful to have these podcasts to share with friends who are not lucky enough to attend the study in person! I binging on them on my daily walks, and it’s such a gift to have these lectures so portable and accessible. What a treasure!

We spent most of dinner tonight discussing with our three boys “The Caldwell Chronicle” on “10 Reasons the End is Near”.  It was such a blessing to talk our way through it as we reinforced teaching them the reason we exist is to glorify God by evangelizing.  We also shared how this world is not our permanent home!​ 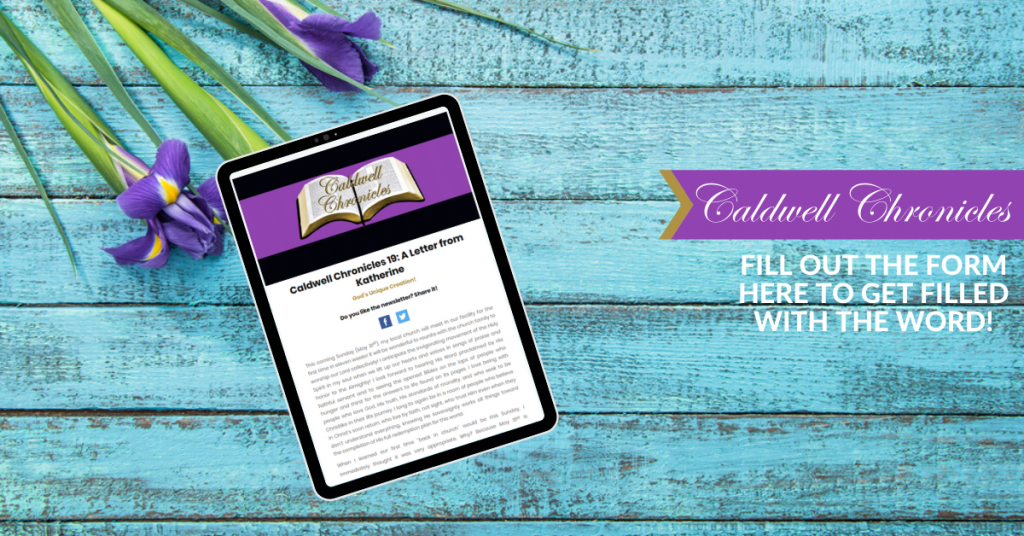